WALTER HAGEN MAKING COURSE RECORD – Snapshot of Hagen making a spectacular drive on the new Saranac Inn course in a foursome in which Hagen and Joe Kirkwood beat Seymour Dunn and Tom Hutchinson for a $1,000.00 purse. Hagen made the 18 holes in 70, creating a record for the course. circa 1923 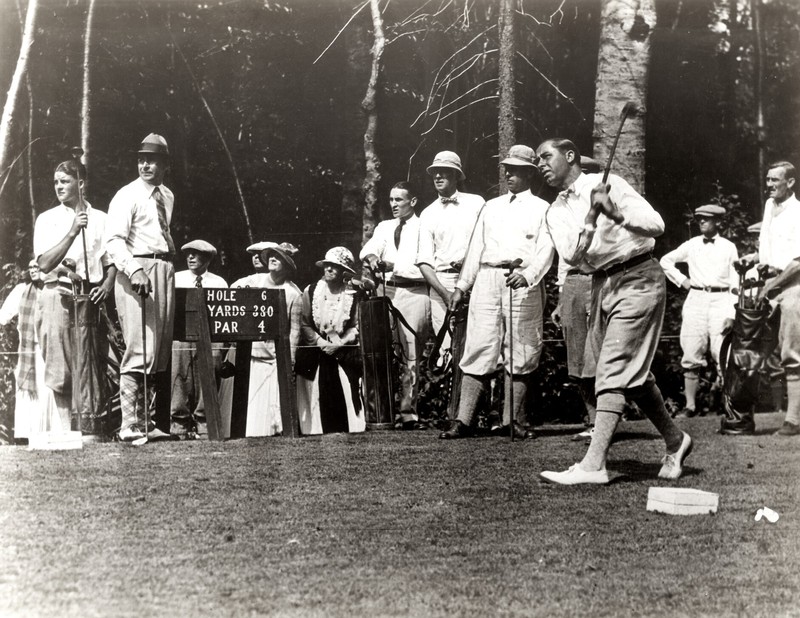 Born, in 1892, adjacent to the first tee on a Northern Scotland golf course into an historic golfing family, it could be said that Seymour Dunn was destined to be one of the great teachers of golf, designers of golf courses and marketers of the sport. He first visited the United States in 1897, as a fifteen year old boy. It was a trip he would never forget and the beginning of a career that would create a lasting legacy in the world of golf. During that first trip to the US, a family vacation, Seymour Dunn laid out a nine-hole course at the Lawrenceville School in New Jersey.

Equally as impressive, if not more so, at only seventeen years old, Dunn was appointed pro at the Societe Golf de Paris, 1899. Not long after that, Dunn began designing and building courses across Europe. In 1903, the first golf course ever in Belgium was designed by Dunn and built at the Royal Ostend Golf Course. He then designed the Royal Golf Club de Belgique, in 1906, for King Leopold of Belgium. In 1908 he designed and built two courses. The first was a course at the Rothschild Estate in France. The second course was in Italy for King Emmanuel. The next year, he was back in Belgium building another course at Royal Zoute.

Seymour Dunn moved to Northern Ireland in 1904 to become the golf pro at Royal County Down. During this time of prolific golf course designing and innovate golf teaching, like being the instigator for the first indoor golf facility, Seymour Dunn tarveled to Lake Placid, New York for the summer of 1906. Unbenounced to him at the time, Lake Placid would eventually become a place he would call home and an area that would be associated with for the remainder of his career. In 1907, Dunn emigrated to the United States permanently to join his famous course designer uncle, Willie Dunn Jr., one of the designers at Shinnecock Hills at Van Cortland Park Golf Course. In 1907, Seymour was appointed pro at Wykagyl Golf Course in Rochelle, NY. In 1909 he found himself back in Lake Placid, where he laid out the course at the Lake Placid Club. He moved to Lake Placid the following year, where he set up a mail order company distributing golf equipment all over the states. Each piece of equipment was stamped with his trade mark, a “Crown and Banner” bearing the legend “vi et Arte” – By Strength and Skill.

Seymour made his reputation as a golf guru, not only with the courses he designed and clubs he made, but also with his innovated approach to teaching. Many of the top pro’s used his instruction methods to improve their game. They included some of the greats of the time: Jim Barnes (https://en.wikipedia.org/wiki/Jim_Barnes), Walter Hagan (https://en.wikipedia.org/wiki/Walter_Hagen) and Gene Sarazen (https://en.wikipedia.org/wiki/Gene_Sarazen). Dunn would demonstrate the correct swing plane using an imaginary pane of glass. This was copied by Ben Hogan (https://en.wikipedia.org/wiki/Ben_Hogan) (in his book “Five Lessons” with no mention of the source. Later Hogan did acknowledge he was inspired to adopt many of Dunn’s swing theories. Today, multiple books recognized that Dunn developed the technique in the 1920’s and Hogan popularized in the 1950’s. In addition, Seymour wrote about golf in books and articles. As his history states,” he designed many courses around New York State. He laid out the course here at Saranac Inn with his Uncle Willie which he considered to be his best work.”

In 1928 he was associated with AG Spalding and Brothers of New York and set up an indoor golf school at Madison Square Garden with 30 instructors and 18 pitch and putt holes. The indoor golf concept was one he first introduced early in his career in Europe.

There is no question that Seymour Dunn’s contribution to the evolution of the game is notable and rightfully so continues to be acknowledged today.

The original Saranac Inn Golf Course was built in 1901 and was only a few holes. It expanded to nine holes in 1904. Six years latter Seymour Dunn and his uncle, Willie Dunn, redesigned the Saranac Inn, expanding it to 18 holes. Dunn himself said that he strategically designed the course to be playable, enjoyable and challenging for all level of play. It is apparent, with the design of Saranac Inn, that Seymour Dunn had an acute understanding of the game of golf and the incredible ability to translate that understanding into a design that lasts the test of time, advancements in technology and generations of golfers.